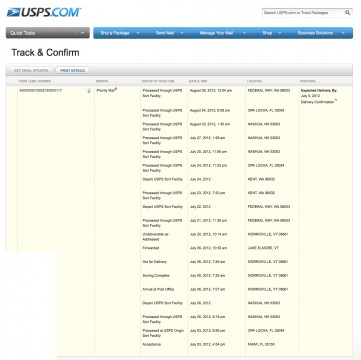 On July 3, 2012 a Miami Mom mailed a USPS Priority Mail Envelope to her daughter in northern Vermont. It was/is a birthday gift and daughter’s birthday was July 6th. It was a new address and Mom used the street and house number (not the PO Box). Consequently, the daughter was not located and the package has been traveling in circles for 26 days as of this writing. Attempts to locate it and redirect have been futile. After several attempts to contact USPS customer service online, including one conversation with a real person who assured the Mom that a special case number would be issued to locate and correct this and that someone would call the Mom on the next business day, the Mom was ready to give up. However, she realized that social media may produce better results, so on day 31 the Mom posted a message to the USPS Facebook page and on day 34, she got a personal note from USPS with a suggestion to call the Morrisville, VT Post Office, and she did. She talked directly with a representative of the USPS and the person was polite, professional and genuinely concerned, plus she called the Mom back the very next morning after consulting with her supervisor and told the Mom that as soon as the package came back to Morrisville, she would call again to let the Mom know. As you can see from the tracking log, it never made it back to Vermont. Instead, it took the route back to Opa Locka, FL and then made a turn to revisit Federal Way, WA. That was on August 6th, 2012.

By now, the Mom is wondering if the little Priority Mail Envelope has gone undercover, incognito, or is in a state of terminal amensia as it cotinues to revisit the mysterious locations like Opa Locka, FL, Nashua, NH, Kent WA, Federal Way, WA, Morrisville, VT and Lake Elmore, VT.

The Mom is also wondering why it was never marked ‘return to sender’ or maybe that is no longer an option.  If you know anyone in the USPS that can actually locate the package and get it either delivered or returned to sender that would be much appreciated, and yes, I’m the Mom in this story.